As a young girl growing up in Sampson County, Maggie Underwood Royal says she enjoyed the pleasant fragrance of a shrub she calls “sweet bush” greeting her when she went outside during the warmer months. This was before the GFL Sampson County Landfill was built near the Snow Hill Missionary Baptist Church, where Underwood has attended since she was 11 years old.

Underwood, 72, said that since the landfill was built in the 80s, simple things once taken for granted, such as playing in the yard, are often avoided if the air quality is bad.

“We used to do more outdoor activities with our church children, but some days the odor is so bad you don’t want your children outside,” she said.

Further contributing to air quality issues — aside from having a regional landfill that receives waste and construction debris from across the state — is the fact that Sampson County is heavily populated with Confined Animal Feeding Operations (CAFOs). It’s said that in Sampson County, the hogs outnumber people nearly 40 to one. Also, the county is home to a wood pellet manufacturing company that has previously been cited by the state for air quality violations.

It’s enough to take your breath away.

Breathing in foul air is not just a nuisance, it can also be detrimental to one’s health, decades of research shows. Hundreds of gasses can be released into the atmosphere from a CAFO, for instance, and many are hazardous such as hydrogen sulfide, which can cause brain injury, dizziness, seizures (at high levels) and a host of other problems, according to the National Institutes of Occupational Safety and Health.

But a new wind may start blowing. Having endured years of foul-smelling air created by CAFOs, the landfill and industry, Sampson County will soon receive technical assistance aimed at improving air quality.

CleanAIRE NC, a nonprofit organization that works to address air quality and climate change issues, has been awarded $500,000 by the U.S. Environmental Protection Agency to establish a community air monitoring network in Sampson County, according to a recent press release. The advocacy organization will target long-standing health and environmental injustices caused by cumulative air pollution impacts.

The money will “empower communities in Sampson County to target major sources of air pollution and protect their health,” said Jeffrey W. Robbins, executive director of CleanAIRE NC. “By creating a Sampson County Air Monitoring Network, residents will learn how to collect, analyze, and publicly report data on three major pollutants emitted in their communities that can drive higher mortality rates.”

According to the press release, CleanAIRE NC will use the grant to distribute low-cost air sensors in communities surrounding industrial-scale hog and poultry farms. These animal operations are heavily concentrated near communities of color and emit air pollutants that cause significant health problems. By capturing air quality data near these facilities, residents can demonstrate an inequitable air pollution burden. The hope is that this data will motivate policymakers to change how major sources of air pollution in Sampson are regulated.

CleanAIRE NC will also work with the Environmental Justice Community Action Network (EJCAN) to provide clean air education and technology and advocacy training for community members. These resources will increase community capacity and empower residents to leverage their air quality data to reduce pollution in their communities and generate long-term health benefits.

“EJCAN is excited to partner with CleanAIRE NC in providing air monitors to local citizens,” said Sherri White-Williamson, chair of EJCAN and a Sampson County native. “By using the monitors, citizens will become more aware of what pollutants are in the air that they breathe every day.”

CleanAIRE NC says that Sampson County’s 2.1 million swine leak untreated pig waste into the surrounding environment. The group claims the lagoons storing fecal waste are a major source of several toxic air pollutants such as fine particulate matter (known as PM 2.5), volatile organic compounds (VOCs) and hydrogen sulfide. These pollutants have been linked with the five leading causes of death in North Carolina — cancer, heart disease, diabetes, stroke and chronic lower respiratory diseases including asthma. Exposure has also been linked with other health risks, such as lower birth weights and mental health problems.

Despite these risks, Sampson County has historically been underserved by regulatory enforcement. North Carolina’s state-operated air quality stations tend to be geographically dispersed and near large cities where there are more emissions from motor vehicles and industry. This has created a large geographic air monitoring “hole” in the Sampson County area  – the nearest air toxic monitoring station is in Wilmington, 34 miles southeast of Sampson County.

By equipping residents with PurpleAir air sensors, CleanAIRE NC aims to fill in this gap and inform communities about pollution sources, ultimately increasing opportunities to advocate for cleaner air.

This project is an expansion of CleanAIRE NC’s statewide Citizen Science network, which was established in 2016 Charlotte’s Historic West End neighborhoods. The grant is among the $53 million recently announced by the Biden administration to support 132 community air monitoring projects across the nation, the largest investment in community air monitoring in U.S. history.

How the process will work

Low-cost PurpleAir sensors will be used to establish a baseline for how much PM 2.5 particles, which “are fine inhalable particles, with diameters that are generally 2.5 micrometers and smaller,” according to the EPA. As part of the project, CleanAIRE NC and its project partners — UNC Charlotte, UNC Chapel Hill, RTI International and Eastern Research Group — will train selected Sampson County residents as citizen scientists, and they will play a role in the data gathering process, Robbins said.

“We want to take the information, create a dashboard, and then create that level of consumable information so that residents know, [who] are in the impacted communities, what we’re discovering and what are the implications.”

In December CleanAIRE NC and EJCAN will hold a meeting in Sampson County to discuss the project with local residents.

Two WBTV employees killed in I-77 helicopter crash in Charlotte 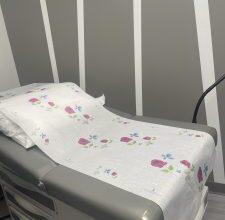 Health care for women only?

11-year-old girl shot in the neck with BB gun: Here’s why doctors won’t remove the BB