Now that North Carolina has 46 confirmed cases of monkeypox, public health leaders are moving to inform affected communities about how to reduce their risk.

Kinsley’s co-host for the online event was Rebby Kern, the director of education from Equality NC, the state’s highest profile advocacy organization for the LGBTQ community.

The pairing is reflective of the reality of the monkeypox outbreak. The population that’s been most affected by monkeypox is men who have sex with men (MSM), a term that includes gay and bisexual men as well as some men who don’t consider themselves as part of either group but nonetheless have intimate relations with other men.

Throughout the country and internationally, MSM have been the overwhelming majority of people with the disease. In North Carolina, as of Thursday, all of the reported cases are in men older than 18 with a disproportionate number of them Black men.

Reaching the MSM community with public health messages will be challenging. Many members of the LGBTQ community have long experienced discrimination, both in the larger society and in accessing appropriate health care. Memories still resonate of the government’s slow initial response to the HIV crisis in this country in the 1980s — when most of the early cases were in gay men.

Even now, some 40 years later as laws are being passed to make it more difficult for young transgender people to access gender-affirming care and a U.S. Supreme Court ruling has raised the threat of reversing a landmark same-sex marriage ruling, it is challenging for many to accept messaging from government actors.

Public health officials are aware of this history and the current political climate as they try to get the word out about monkeypox. They want to acknowledge and focus education and interventions on the LGBTQ community in a way that doesn’t push them away or place unnecessary blame on the community.

“Getting the messaging right here is really important,” Kinsley said during the town hall. “There are a lot of complexities.”

‘Probably existed for a long time’

“This is not a gay disease,” Kinsley said during the meeting. “Viruses don’t have a preference in, kind of, different communities in that way.”

In fact, children are many, if not most, of the people who’ve been infected with monkeypox in Africa, where the disease has existed for years at a low level in multiple populations.

Monkeypox causes symptoms a lot like smallpox, but it’s not nearly as fatal. The death rate from smallpox could be as much as 30 percent of all cases, while the death rate from monkeypox is far less than one percent.

That’s even though the two viruses are closely related. Before DNA testing, the only way to tell them apart was under a microscope. They’re so similar that researchers didn’t even know they were separate diseases until vaccination eliminated smallpox from African populations. It turns out that getting a smallpox vaccination also protects against monkeypox.

“Monkeypox probably existed out there for a really long time and it was just counted as a case of smallpox,” UCLA epidemiologist Anne Rimoin told this reporter in 2010 after publishing a paper on monkeypox. Now Rimoin has been named by the World Health Organization to an international panel focusing on the disease.

Monkeypox —  named because of an outbreak in monkeys in a Danish lab in the 1950s — is actually carried by rodents and other small animals often hunted for meat. In Africa, many of the outbreaks were associated with hunters or children playing with the animals.

In the first decade of this century, researchers discovered that rates of monkeypox had increased in central African countries decades after the end of the smallpox eradication campaign of the 1950s and 1960s. Since the eradication of smallpox, countries no longer vaccinate against the disease, leaving many children and younger people susceptible.

“We found a twenty-fold rise in the incidence of monkeypox since the cessation of the smallpox vaccination program,” Rimoin said. “The irony is that our victory over smallpox allowed this new disease to flourish.”

Sporadic cases of the disease in this country have been traced to people who returned from travel in Africa. One outbreak took place in 2003 among people who had pet prairie dogs that had been exposed to African mammals imported to this country.

Researchers in the public health system in the United Kingdom surveyed 152 people in the initial British outbreak of the disease in May. All but one of them reported that they were men who had sex with men, often with multiple partners. The researchers believe that the disease’s spread isn’t about people having sex, per se, but about people who are in close, skin-to-skin contact, like what happens during sex.

Cases in this country have been similar, Kinsley said. He also said that the high prevalence of MSM among positive cases is not because of under testing in other parts of the population. The rates of illness in women and children have been “incredibly low,” he added.

Nonetheless, some other diseases that initially were believed to be confined to specific communities have become more prevalent in the wider public. Methicillin-resistant Staphylococcus aureus (MRSA) was once identified as spreading in networks of men who have sex with men but eventually spread beyond that population to people in gyms and to kids at school. HIV, publicized initially as a “gay plague,” is a disease that’s primarily a heterosexual infection in most parts of the world.

So far, monkeypox hasn’t really made the jump to the general population, but the potential is there.

Infectious disease experts note that the disease isn’t only spread by skin-to-skin contact but could be transmitted by touching clothing, sheets, towels or other items exposed to the infectious rash or fluid from the pox.

Monkeypox spreads in different ways. The virus can spread from person-to-person through:

It’s also possible for people to get monkeypox from infected animals, either by being scratched or bitten by the animal or by preparing or eating meat or using products from an infected animal.

Monkeypox can spread from the time symptoms start until the rash has fully healed and a fresh layer of skin has formed. The illness typically lasts 2-4 weeks. People who do not have monkeypox symptoms cannot spread the virus to others. At this time, it is not known if monkeypox can spread through semen or vaginal Colorized transmission electron micrograph of monkeypox particles (red) found within an infected cell (blue), cultured in the laboratory. Image captured and color-enhanced at the NIAID Integrated Research Facility (IRF) in Fort Detrick, Maryland. Credit: NIAIDfluids.

“You can get it being in close contact, hugging, it’s not limited to quote-unquote sexual activity of any kind, let alone homosexual gay activity, or whatever folks are trying to implicate,” Adeleke said.

Public health officials have to be careful, she said, because MSM-focused messaging could end up being stigmatizing.

“Similarly to how we deal with HIV being considered a quote-unquote, gay disease, when in reality, it’s not, that furthers that stigma,” Adeleke said.

“There’s space to perpetuate the ‘LGBTQ people are groomers’ narrative,” she said, especially in this political climate that has been increasingly hostile to the gay and transgender community.

“We are in a very distressed moment,“ Equality NC’s Kern said during Thursday’s town hall. “We see attacks against LGBTQ people at the legislative level, on the ground, at polling locations, as well as unfortunately rising amounts of anti-trans violence.”

Messaging that’s too focused could also backfire if and when the outbreak spreads beyond the population of men who have sex with men, said Noah Riley from the LGBTQ Center of Raleigh. People in the wider population could end up being taken by surprise if, say, a child gets it because they’ve been exposed through any number of situations that have nothing to do with sexual contact.

Federal officials told reporters last week that two children in the U.S. have been diagnosed with the disease and in Europe, a half dozen cases have been reported, according to media reports.

“The broader community doesn’t think that they need to be paying attention or taking care of their own health care, or being cautious of their interactions,” Riley said. “Already we’re seeing it has spread beyond the LGBT community and already children have gotten it.”

On top of that, the LGBTQ population might end up taking the blame for outbreaks, further deepening stigma against a community that has been historically marginalized.

Riley said people from the LGBTQ community will likely be the most trusted messengers for people who are at risk. That could be community health workers. It could be informal information networks. It could be health education at coming events such as the OutSouth Queer Film Festival in Durham and various Pride events.

Already, Riley said, there’s been a lot of information getting passed around informally and his organization is gearing up to do more formal outreach, including a health fair scheduled for Aug. 26.

“That would be a good opportunity to target the priority population,” he said.

Evelyn Foust, who has spent decades with the state health department combating HIV and HIV-related stigma, said the most important thing is good communication from government officials, from providers and from patients.

“All good health care starts with awareness on the part of the community in this case, including the patient, as well as the clinician and it starts with a conversation,” Foust said. “Then that conversation has to include messaging back and forth that helps both patient and physician get to the right understanding.

“There’s got to be comfortableness between the provider and the patient to ask those questions to share information and I think we still have some work to do there to ensure that happens.”

Kinsley summed up how he hopes North Carolina can move forward as it tries to better contain monkeypox.

“Can we really talk the talk and walk the walk?” Kinsley asked. “What we aspire for all of our providers… is providing culturally competent care that doesn’t further stigmatize or create shame around normal parts of life.

State epidemiologist Zack Moore said that the state lab has had the ability to test for monkeypox for years, but getting to scale has been a challenge.

Durham County health director Rod Jenkins said that one of the biggest challenges his department has had has been in getting adequate testing for the condition. Durham County was where the first case in the state was identified.

In the few weeks, the state has ramping up its testing ability now that commercial labs have been approved for performing tests.

“We certainly have the ability to vaccinate,” Jenkins said.

That’s still a hurdle. Moore said that the initial federal allocation to North Carolina was only about 4,500 doses of vaccine, but this week federal officials announced the release of 789,000 more doses of vaccine that will be distributed around the country.

“We need to move quickly in the spaces where folks are impacted and leverage our most powerful tool, which is vaccine,” Kinsley said. “If we move quickly and we get more vaccine, which we continue to push for, we really can contain and eradicate, but we need everyone’s help. And focus.”

The post Messaging a challenge for getting the word out on monkeypox appeared first on North Carolina Health News. 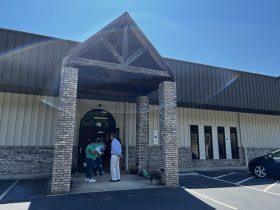